In search of warmer weather after a very chilly December in Shanghai, we headed to the tropics for the January 1st 3-day public holiday and spent 3 days in Chaozhou China, a city of 1 million located in northeastern Guangdong province just a few miles north of the Tropic of Cancer. 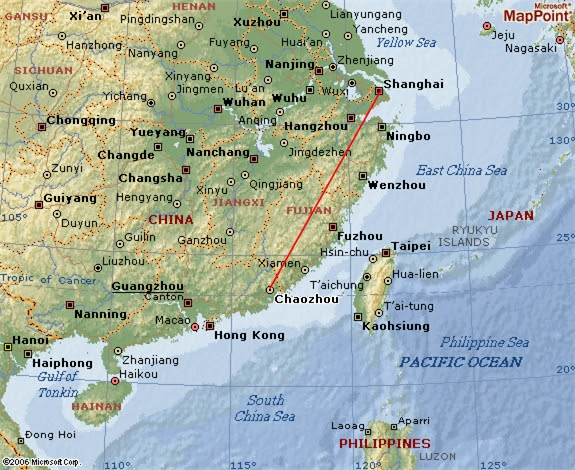 Dec 31, 2005: Up at 7:15, showered, ate a quick breakfast, called a taxi, and arrived at Shanghai Hongqiao airport about 8:45. It’s about 30 minute ride on the expressway and a 35 RMB fare from our apartment to the airport. Briefly checked out the shops in Terminals A & B before leaving on time on the 10:10 flight from SHA to Shantou. Chaozhou does not yet have its own airport, so we flew into Shantou, a city of 2.5 million, which was one of the original 8 Special Economic Zones established in 1980’s.

Arrived on time about 11:55 and walked out onto the tarmac to a pleasant 74 degree, sunny and breezy day. Yes! We could have taken a series of local buses to get from the airport to Chaozhou, for about 40 RMB total, but opted instead to hire a taxi at 100 RMB (bargained down from 120) for the 40km ride from the Shantou airport directly to the Feng Chen Hotel at 16 Taiping Road Chaozhou.

Here is a photo of a map of old Chaozhouo that was hanging on a wall in one of the old building in Chaozhou. 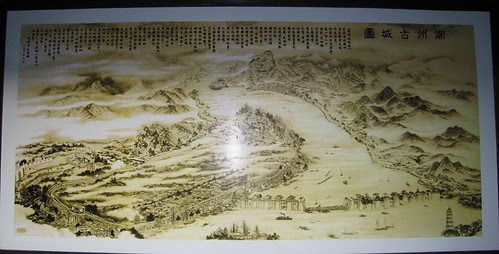 After a 50 minute drive past banana fields, sugar cane fields, a ladder factory, the Phoenix Pagoda, and a brief ride on the Han River dike, we were dropped off at our hotel about 1:00PM. The hotel was un-full and we offered a 50% discount on 5th floor room with a view, TV, 24-hour hot H20 (more about that later) for 168? RMB per night. The Feng Chen is in a pretty good location: a short walk to the City Wall, one minute from a bicycle rental, and a 10 minute walk to Temple Square, the main attraction of Chaozhou. However, it has definitely seen better days and we cannot recommend it.

By 2PM we were settled in and strolling down Taiping Lu towards Temple Square. The square is the center of the tourist industry with the Kaiyuan Buddhist Temple on one end. Complimenting the temple are several vegetarian restaurants, gift shops, a tour bus parking lot, and a bicycle rickshaw rank. That’s a huge privacy screen between the bus and the temple. 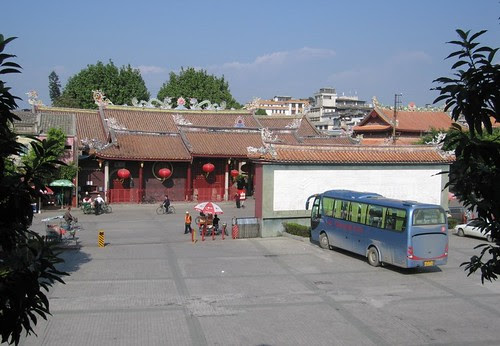 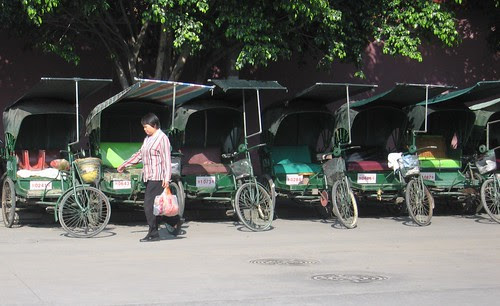 We had a set menu for lunch (58 RMB) at Lian Hua vegetarian restaurant which is just across from the Kaiyuan Buddhist Temple. During lunch I was sweating and feeling a bit queasy. Must have just been the heat because I felt fine later. [That’s the lanyard for my compass you see around my neck.] 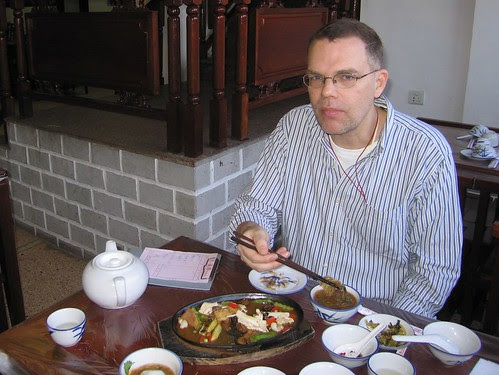 We then toured temple, built in 738, somehow avoiding the 10 RMB entrance fee. A good example of a Buddhist temple. There is much info on it from the usual sources. The eastern section had some covered pavilions with benches that were filled with old men chatting and passing the time.

Front view of the first pavilion. 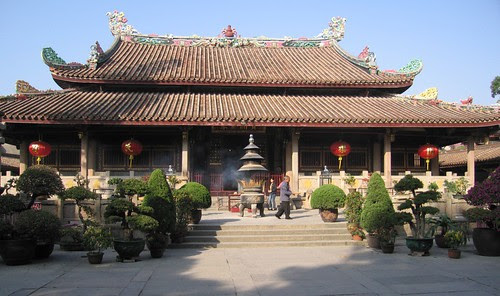 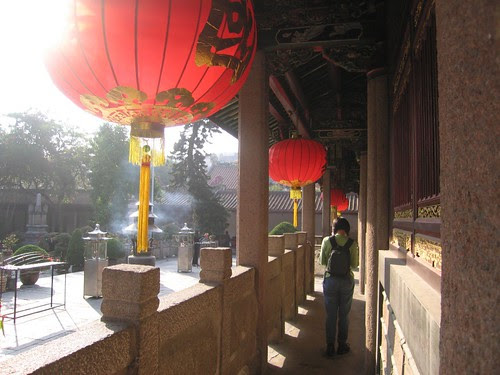 Then out through the City Walls and over to the waterfront promenade where we checked out the reconstruction efforts on the famous Xiangzi Bridge.

Here’s a shot of the East Gate and City Wall. 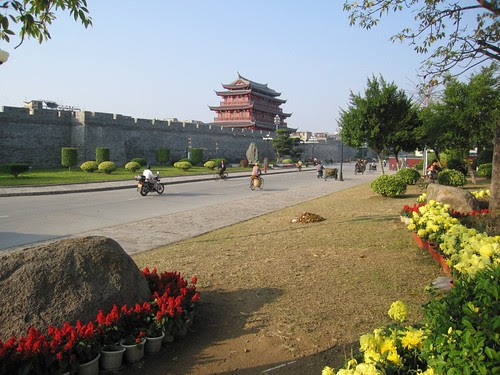 The Xiangzi Bridge, first built in 1171, has been closed since Oct 2005 and will be closed for at least a year while the 16th century pavilions are reconstructed on top of each piling. A new modern bridge is being built about 1KM up stream to go with the existing “new” bridge about 1 km downstream.

Check out the “floating middle section” of the original bridge as shown in the photo below. The floating section was replaced by steel girders in the 20th century. The current restoration will rebuild the pavilions that you can barley make out on top of each piling.

Here is a current photo of the bridge. Note that the 20th century steel girders have been removed from the middle section and the reconstruction is beginning on the pavilions at the far left. A local told us that the bridge will reopen for pedestrian and bicycle traffic only. 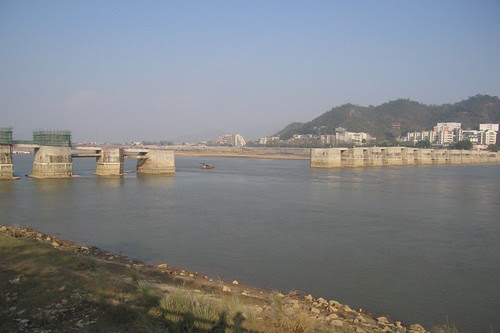 A close up of the reconstruction work. I like old bridges. ;-) 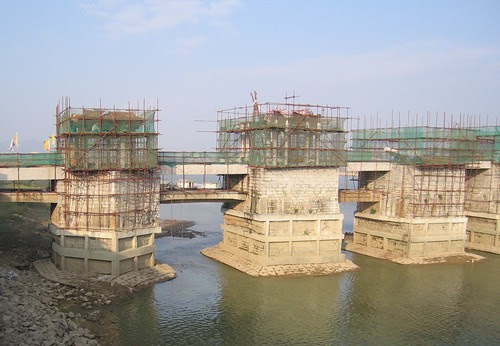 And a closer view of the old pilings on the far bank. 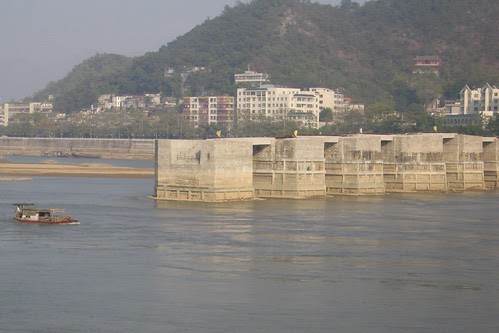 Just inside the city wall by the East Gate was a small ancestor worship temple which featured performances by a touring Chinese Opera company on temporary stage just across from the temple entrance.

Look at the size of those purple incense sticks in front of the temple. 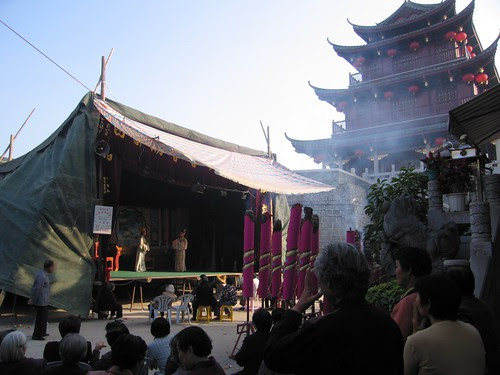 Dec 31 is the fist day of the lunar month and important to the normally meat-eating Buddhists become vegetarians for a day on the 1st and 15th of the lunar month. Also, on the 1st and 15th one goes to the temple to provide for your dead ancestors by sacrificing fruits and burning symbolic money. The fruit and meat is placed on an altar. The money is placed on the altar and then burned in a giant oven outside the temple.


The altar below has a headless plucked chicken, oranges, a bag of mushrooms, noodles, and other offerings. Also you can catch a glimpse of the giant joss sticks and Chinese Opera in the background. 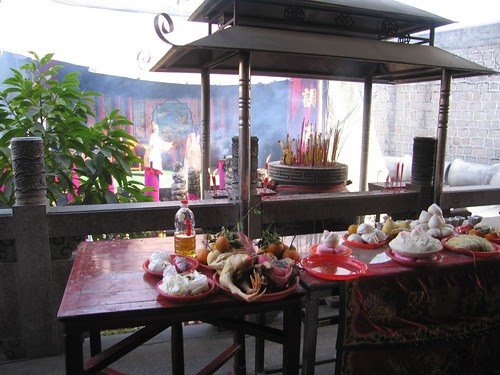 Close up of the altar.

Giant oven outside with yours truly standing next. The oven is used to “burn” the paper offerings. 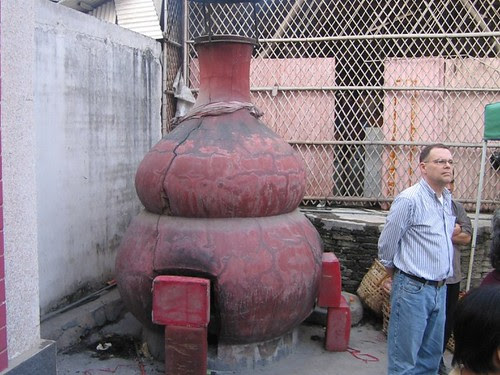 Because of all the extra activity, we decided to hit as many temples as we could that afternoon. First we headed north down the back streets looking for the Confucian temple.

On the way we stopped at one of the city gates. 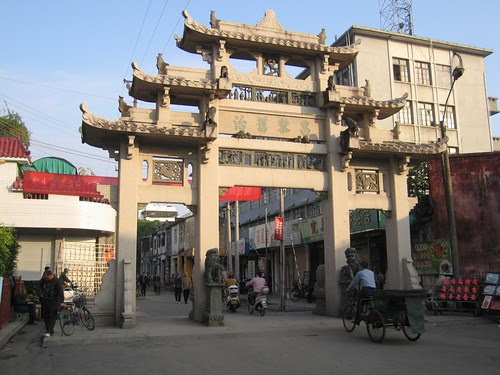 And also stopped at an old building that had not been renovated and took these photos of wood carvings. This is a battle scene. The figures are about 4 inches high. 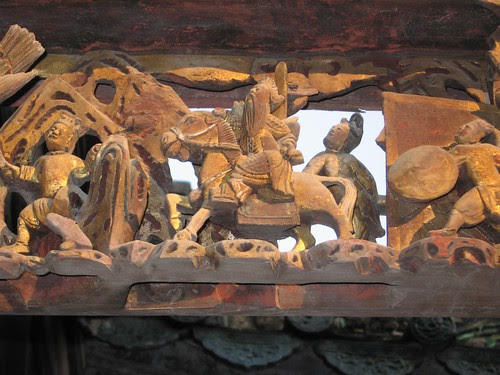 Another scene from the end of the same beam. 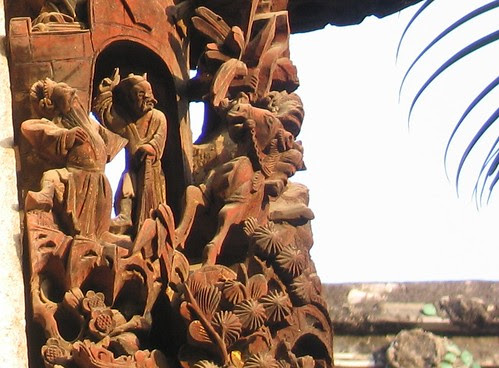 We did not locate the Confucian Temple but found a Buddhist nunnery instead. It is not on the usual tourist maps. The nunnery is located down a twisting “trail” of narrow lanes. We found it by following motorbike traffic and by using small shops selling incense and paper money as landmarks. The denser the shops, the closer one is to the temple. Yes? The nunnery had a large female Buddha and was quite intimate. I sat on a bench in the corner while Sun-Ling looked around and took some photos. 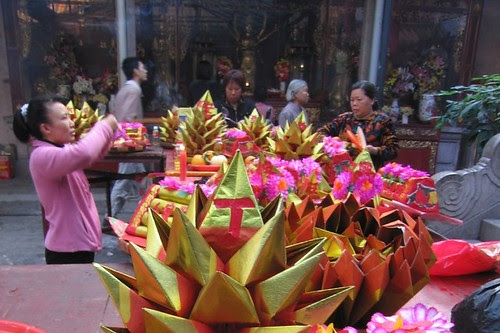 As closer shot of the “golden nuggets” and other gifts to the ancestors. 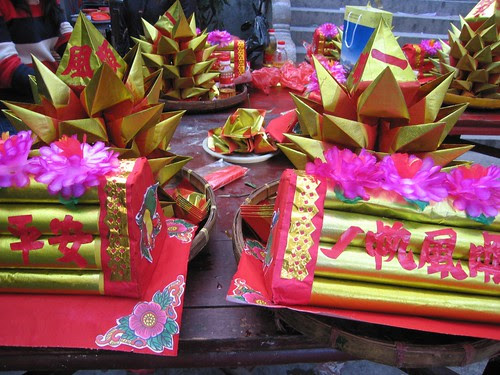 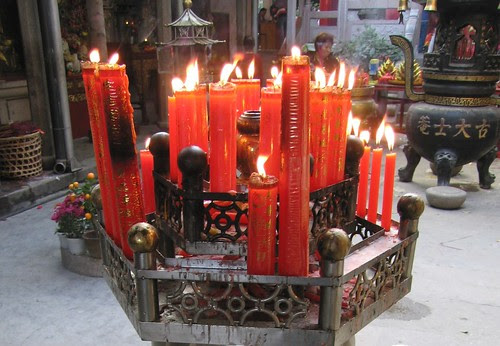 After a short walk to the Mansion of Emperor’s Grandson-in-law Xu which was close for repairs, we headed back over to the waterfront and walked north on the promenade. We spent about an hour enjoying the early evening activities with the locals. There are several swim clubs at this point on the Han River. They have floating clubhouses for changing and the locals, men, women, young and old, come year round after work or after school for a swim. The water is refreshing this time of year and it is fun to watch the pre-dip arm swinging, toe-testing, and self-splashing. Then, after diving in, 30 seconds of vigorous arm flailing and leg kicking lead in to a smooth breast stroke. 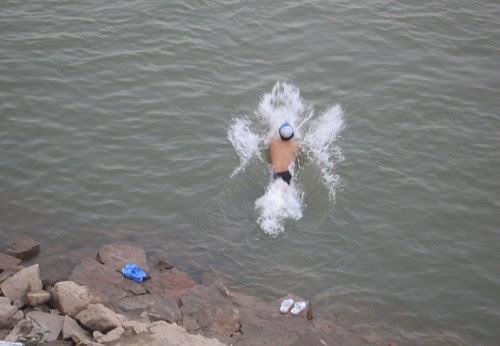 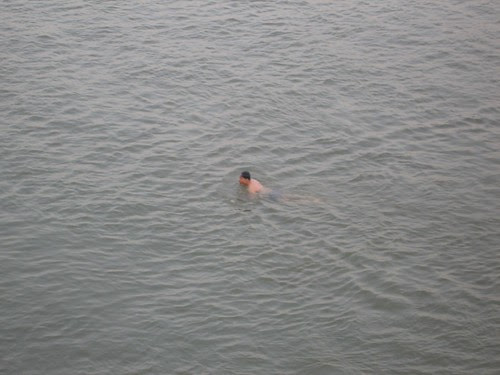 In the photo below you can see the construction of the new upstream bridge, a beached swim club clubhouse [upper left corner], a couple of swimmers walking to shoreline, and some on/off ferry activity. The bicycle ferry and tour boat docks are located between the swim clubs (and swimmers). When the new bridge is completed, I suspect there will be no need for the ferry. We spent about 15 minutes just watching the bicyclists maneuver themselves on the ferry with precision. 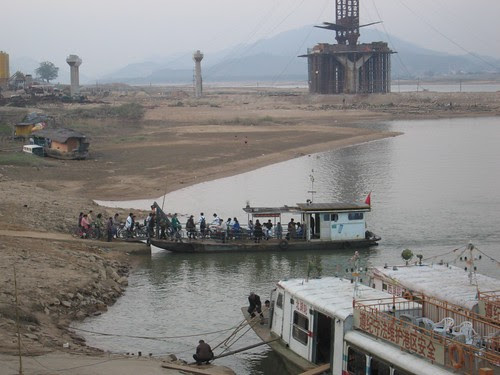 Another shot of the new bridge. 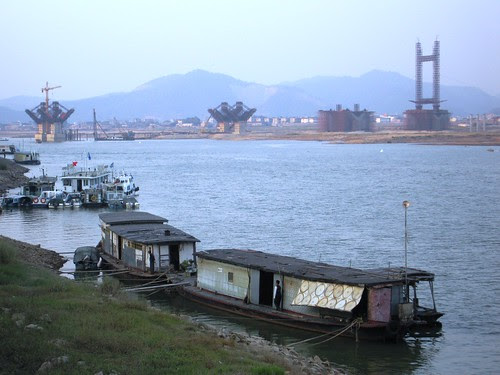 Nearby was a bike rental stand with tandems and triples only, no singles, for 4 RMB per hour. Each bike had a red light attached to the front handle bar and the proprietor said most of his business is at night. Makes sense in this hot and sunny climate. We inquired about directions and distance to Xiang Pu Zai town, which is our first destination tomorrow. Sun-Ling is determined to bike there.

Heading back to the hotel for a short nap we spotted a second bike rental shop very close to our hotel. While we were again asking about fees and directions we were offered the local kungfu tea kungfu cha, which is the local style of preparing and drinking tea which can be described in a sentence as “the continual and sometimes simultaneous actions of heating water, brewing tea, rinsing teacups, pouring tea, and drinking the hot tea out of very small cups”. More about kungfu tea

We headed back out around 7PM. The waterfront, city walls, and pavilions are lit up every night. We strolled down the city wall, observing other strollers and outside eaters. Took some photos of the night scenes at the East Gate, including the never ending opera performance and walked down Xinqiao Lu, the main drag, enjoying the night market which stretched for about 1 KM, while looking for a place to eat dinner. 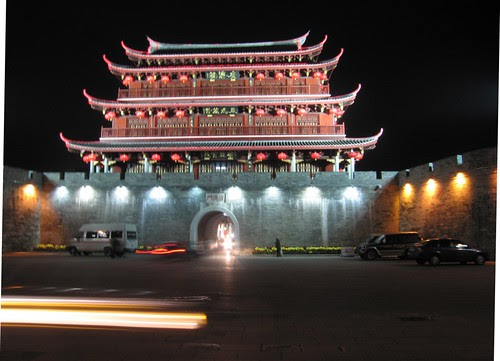 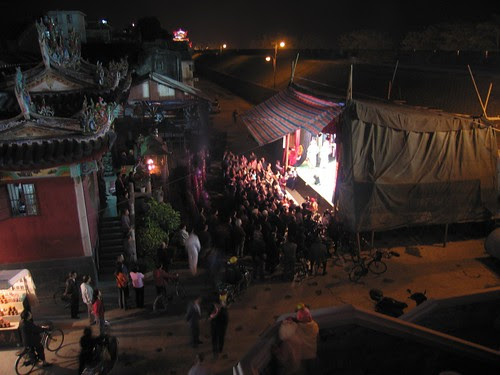 A closer view of the opera at night. Look at the headgear! 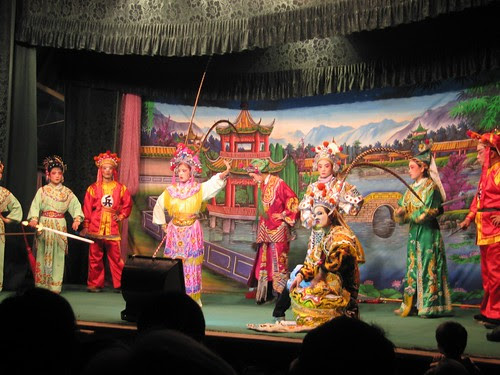 After much looking we finally found the Mansions Restaurant which is near the main bus station. It is the restaurant for the newly renovated Chaozhou Hotel. We had a nice dinner for 54 RMB: pancakes, taro and pumpkin, taro with peanuts, rice soup with pi dun and cilantro, bing (pancakes) made from water chestnuts, fried rice noodles, and beer. Yum yum.

Checked out the bus schedule to San Rao, our destination the day after tomorrow. There is a departing bus at 7:30 AM and 1:30 PM. Also got a quote from a taxi driver. Took a bicycle rickshaw back to the hotel, passing by West Lake on the way.

Some observations from our first day:
One: There are a good number of beggars which hover around the temples, especially Kaiyuan Temple, and the night market. They have 2 main modis operandi. First, the mother with small child in tow who shout out “che fan” and “hello dada” respectively. Second, the old man or woman with cane and bowl who tap the cane against the pavement and shake the bowl to get your attention. May also shout “che fan”. Even though these old folks project a pathetic facade, they descend on you fast and one actually has to move pretty darn quick to out distance them. ;-) In addition, there are the roving blind musicians who team up with a seeing handler to seek out their next victim uh customer.
Two: We saw more school children here in one day than we had seen in all 6 weeks in Shanghai combined. It’s good to see them out and about with friends. Walking, biking, climbing, trees, kicking the soccer ball.
By john - December 31, 2005 2 comments: