Arrived in Burma on Dec 18th and after a long car ride to Bhamo, a super long boat trip down the Ayerwaddy River to Katha, and an overnight train, we are now relaxing in Myitkyina in Kachin State.

At one time in 1944/45 the airport here in Myitikyina was the busiest in the world, flying supplies over The Hump to China.

Many Christians here in town and I had a chance today to sing "Oh Come All Ye Faithful" with a local Baptist congregation but esacped just in time. haha

We are staying at the New Light Hotel, owned by a nice Sikh family. The showers are hot and the included b-fast is tasty.

Happy Holidays to all and the best 2009.

Today we made arrangements to leave China on Thursday and cross into Myanmar (Burma) on land at the Ruili, China/Muse, Myanmar border crossing. Can't predict when or if we will have Internet access during our 28 days in Myanmar so this may be this last blog post for awhile. That said, for the next week we will be in towns very close to the Chinese border, along the old Burma Road (the section from Myitkyina to Tengchong is called the Stillwell Road by the Chinese), and commerce is briskly flowing along these routes now, so who knows; if we stay at a Chinese run hotel in Bhamo or Myitkyina we might have Internet.

Our planned itinerary for the next week is Ruili to Bhamo by car; Bhamo to Katha by boat; Katha to Myitkyina by train. I will put some green pushpins on our Google Map for those three cities.

UPDATE: And a Happy Holiday Season to all our family and friends and readers!
By john - December 16, 2008 2 comments:

We bought an MSI Wind U100 netbook/notebook computer last summer to augment our Nokia N800. Both are traveling with us on this trip. A friend just asked how the MSI was holding up and I reported that it is an awesome, durable machine. The Intel Atom 1.6 GHz chip is a workhorse and can handle 10+ Firefox sessions plus additional applications and processes with no problem. The onboard SD card reader makes uploading photos very easy - we left our multi-card reader at home. The built-in camera is great with Skype; however, the speakers are crap. Oh well. We opted for the Love Edition with the 3-cell battery which has worked fine for us. Lighter is better.

Overall the MSI Wind is awesome and we occasionally squabble over typing time as we have been able to find a hotel room with heat, hot water,and internet in almost every place we have stayed so far in China. We mainly use it for trip research(attractions, hotels, train schedules,etc.), checking the weather, keeping up with news and emails, storing photos, and blogging.

We also bought a GPS puck to use with the N800. That has turned out to be very cool. Know your altitude.

Here is a photo of Sun-Lin using the MSI in Kunming. 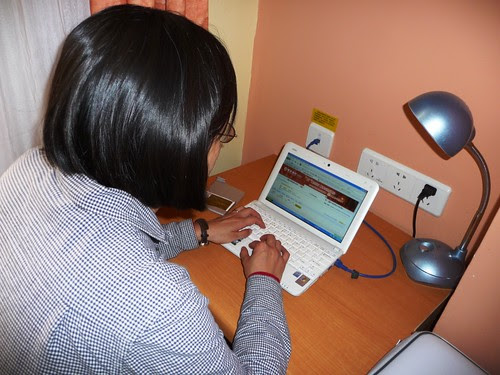 The first part of our journey is over. We are still in China, but have left the Yangtze River Basin and entered Southeast Asia.

In the space of about 3 hours, on our bus ride from Xiaguan to Tengchong, we crossed first the Lan Cang Jiang (Mekong River) and then the Nu Jiang (Salween River) to effectively put us in Southeast Asia.

The Mekong is well known and we have encountered it many times in our travels at Ho Chi Minh City, Phnom Phen, Vientiane, and Jinhong; however, the Salween which is the longest undammed river in Southeast Asia was unknown to us before our trip to Myanmar last year.

The new expressway crossed the Salween then headed south along the western bank. After a few minutes we exited to the old road, continued along the river, then took a sharp right to head up and out of the gorge. On the way up we had views back to the impressive Nu Jiang Valley. Wow! Sorry, no photos from the bus window.

Here is a photo of us at Zhongtian Temple in Heshun Village, just outside of Tengchong in Yunnan Province , west of the Nu Jiang River. Lots of activity at the temple that day as it was the 15th of the lunar month. 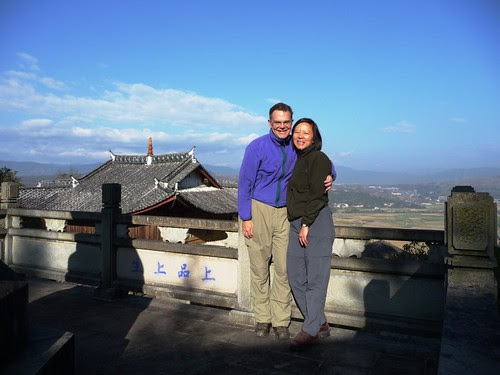 We are in Dali, a so-called backpackers town in Yunnan Province; a town without heat; a town without a bus station. No heat even though winter nighttime temps get down to just above freezing because the locals are tough and since there is also no need for cooling in the summer at 2000 meters elevation, there is no sense that climate control indoors would loved by visitors. No bus station so the local travel agents can make hefty profits selling the tickets directly to travelers at much higher prices.

But we liked Dali anyway. Rented 2 bikes for the day for 15 RMB, just less than 2 USD. Had an awesome mushroom pizza today, and an awesome local hotpot last night. Bought a few souvenirs at reasonable prices, and rode the local bus yesterday to a bustling Market Day in Yousou, a Yi minority village just 45 kms from Dali.

I'm still behind on photos.

And I've been keeping the Google Map updated. The red pushpin is our current location.
By john - December 06, 2008 3 comments: