I made up a quiz that bounces around my head from time to time called Bus Ride From Hell? Maybe I'll publish it here someday; or on Facebook.

The other day I was moving my recent travel journals around when one fell open to a page - Dec 15, 2008 - that had a note that said


extra 1/2 point if person next to you who is throwing up out the window is also moaning. ;-)

If you follow our photos on flickr then you know that we are into 20th Century Modern Architecture especially Art Deco and Art Moderne. We make a point of seeking out this type of building in our travels and were pleasantly surprised during our 2008/2009 travels in Myanmar (Burma) and India to find quite a number of Art Deco and Art Moderne cinemas.

Some of the Art Deco cinemas in India are well known like The Eros in Mumbai and The Metro in Calcutta and easy to find. But there are many, many older cinemas in India and it's quite likely to run into a gem anywhere. In Burma, it was quite a thrill to come across older cinema in cities which are off the beaten track like Bhamo and Myitkyina. And in Yangon, many of the cinemas have large hand-painted posters.

We find these old cinemas interesting in several ways. First, the beauty of the Art Deco/Moderne stylings. Some are genuine pieces from the heydays of the 1930's and 1940's when both Deco/Moderne architecture and "talking pictures" were symbols of 20th Century modernism and progress. Others are from the post war 1950's and have an International, Tropical or Socialist flavor.

Second, the degree of upkeep of the building sometimes gives a glimpse into local culture and history. Some cinemas are well kept with minimal changes to the original design. Others are sparkling new and renovated to a degree that they have lost their charm. And some are run-down and covered with billboards, some are closed. Each one tells a story.

Third, with the consent of friendly workers we sometimes get a look into the cinema hall which can be a walk back in time to the era of ceiling fans, balconies, and ancient projectors.

I've put together a set of photos on flickr that has most of the old cinemas we saw in 2008 and 2009. Most are from India and Myanmar but there are a few from Laos as well.

The Eros Cinema in Mumbai.

The hired van - our pile of luggage would not fit in a normal taxi - arrived at Shanghai's Pudong International Airport (PVG) on Thursday April 30th at 1:00 PM after an uneventful 30 minute ride from Sun-Ling's parents' apartment. We pushed our luggage carts, stacked high with the maximum number and poundage of both checked-in and carry-on bags, towards the Delta counter to check in for the 3:35 PM DL18 only to find it unmanned. Oh no!

It turns out that the Thursday DL18 flight from Shanghai to Atlanta that we had purchased back in September 2008 had been canceled/stopped/rescheduled many months ago. How did we manage to turn up for a flight that did not exist? ... A combination of bad luck, poor service by Delta, and our own stupidity. I'll spare you the long version.

After a call to Delta, we found out that we were booked on the next day's 3:35 PM DL18, took a room on our own dime at the Airport Hotel 168, located conveniently between Terminal One and Terminal Two, and flew back home on May 1st.

View from our hotel room towards Terminal One.

The kindness of strangers. On the morning of May 1st, we were standing at the KFC counter lamenting that we could not buy a 10 RMB cup of coffee since we only had 7.9 RMB in cash and KFC does not take credit cards when an older American guy overheard us and handed me a 100RMB note (about $14). Even though we were not in real difficulty - there was an ATM just around the corner - I took his "gift" after he told us his "stranded with no money" story. He was so sincere in his kind offer that it seemed best to say "thank you very, very, much" take the bill. [Agree or disagree? Post a comment.]

The flight to Atlanta was normal although the veggie meals seemed a little small, but there were lots of snacks available. I watched 3 movies - Yes Man was enjoyable - and 2 documentaries, but only slept for an hour or two. We breezed through immigration and customs in Atlanta. Our friends Tony and Wang Kui picked us up at the airport, took us by Harris Teeter to pick up some groceries, and delivered us home.

The next morning I re-connected its battery and the Forester started right up after a 6-month hibernation. And on Monday morning we drove down to the DMV, paid our $33 fee and $100 fine and picked up a new license plate. Lesson learned: Don't let your Liability Insurance lapse if you live in NC.

Two weeks later. The house seems in good order. All the major appliances still work. I made 2 minor repairs to the lawnmower... It is very satisfying to repair a broken lawnmower... Life is good.

First, let me clarify that the last video posted, The Chapati Stand, was taken in December of 2008. Sorry for any confusion. While on the road it would have been almost impossible to upload this 72Mb HD video file to flickr given bandwidth and availability in Myanmar and India. So while in China at the end of our trip, I uploaded this video as a test of flickr's new support for HD video. Then I used flickr's "BLOG THIS" feature to post the video to this blog. Got it?

We are now back home in Raleigh. It's been quite a journey since we retired in January of 2008. No reflections in this post, that will come later, but I do want to post two photos. The first, a self portrait taken at the Stone Forest in Kunming in January 2008. The second, a photo taken by our buddy Wayne at Element Fresh restaurant in Shanghai in April 2009. We look a bit thinner now don't you think? 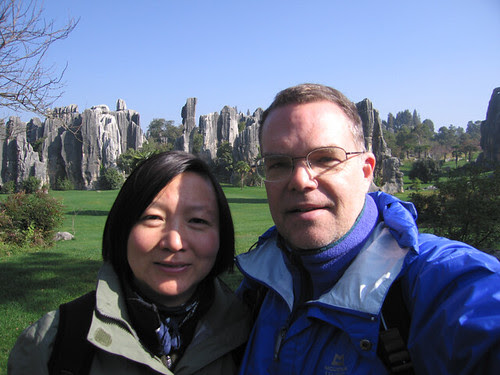