Hard Seat (regular class) train travel in China, never a relaxing way to travel, has recently become even less restful. In addition to the smokers, standers, seat stealers, and cell phone shouters, there are now sellers; not the kind pushing carts with drinks, snacks, and instant noodles, but China Railway employees hawking - like State Fair barkers - an assortments of products from toothbrushes to latex gloves to Chairman Mao gold plated medallions to ultraviolet counterfeit money detectors.

They work the car from one end to the other, sometimes two in one car, dropping a sample on each table, giving a loud and long pitch – it slices, it dices - then returning to pick up the sample and asking if you want to buy. They are annoying and rude, sometimes waking up sleeping passengers to ask “want one?” and targeting kids with trinkets and spinning glowing tops.

What’s the deal? We saw this selling on two different trains in the Hangzhou to Kunming corridor. Is it a new program to raise money for China Railways? The latex gloves were packaged as a CR product, complete with logo. Are the sellers regualr CR employees? Are they paid by commission?

As usual in China, none of the passengers complained about this loud and annoying practice, although our older seatmate did agree it was annoying and suspected that someone was paid off to let sellers on the train and thought that the uniforms were fake. 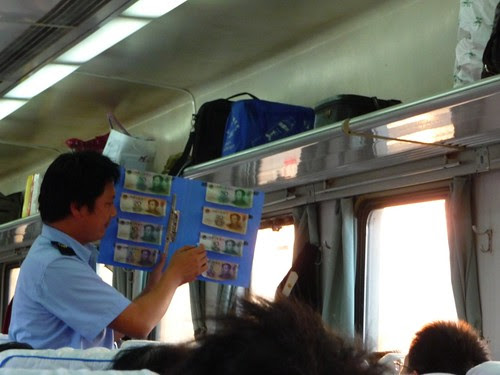 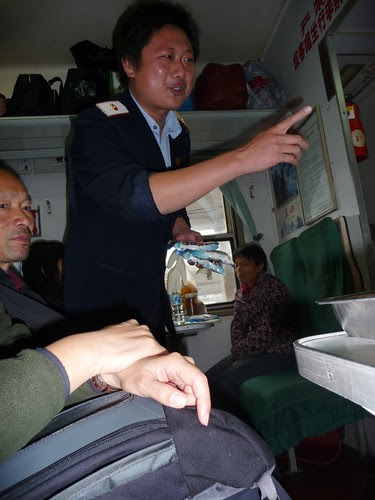 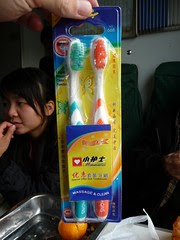 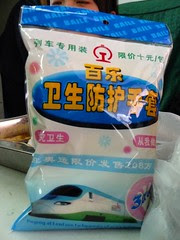 Photos from Ningbo and Jiangxi

I have put some photos from current trip (with brief descriptions) of Ningbo city here and from Jiangxi Province here.
By john - November 22, 2008 No comments:

Where are they now?

We will try to keep this Google Map up-to-date with our current position as the red placemark...Comments and suggestions on how to improve the map are most welcome.

Click on a line or pushpin in the map below to explore.

With the global economic downturn, John kept thinking that Shanghai did not seem the same hustle and bustle when we lived there. All he had to go on was the market index and unquantified reports of drop in real estate prices.

Today I happened to sit next to a young sales manager from Huzhou population 2.7 million. He works for a company that makes a component for compact florescent light bulbs. His clients are bulb manufacturers whose products end up on shelves at Walmart, Home Depot, etc. His company is at 500 workers, down from 600 plus at the height. Sales are down 30%, $1.4M to $1M. Companies that rely mostly on US exports are struggling to stay in business at all, not to mention production cuts and layoffs. Restaurants that used to be frequented by local businessmen are hurting. Under the direction of their county manager, the whole county is keeping their eyes tuned to CCTV (State television) 2 which now reports on business news directly from Wall Street, as it had rarely done before. Everyone is holding their breath, hoping the downturn will be a short lived one.

My seatmate also told of a government bailout of a stuffed animal manufacturer in Guangdong that employed thousands of workers, paying back wages and placing workers in other sweatshops. This reminded me of a friend in Shanghai had mentioned that her aunt used to be a in partnership that made nylon flags and windsocks for export. The partnership is now folding and looking to invest into an organic farm.

Travel is the ultimate metaphor for life where the lessons are learned on an accelerated schedule. The most valuable lesson for me is that things always work out, only if I can overcome my nature to worry.

Before starting on our 6-month journey, we had a China-India-Myanmar visa relay. Unfortunately Hurricane Ike kept our passports in Houston for an extra 10 days. And after many desperate phone calls, hypothetical what-if's, and restless nights, we finally got back our passports back from the Myanmar Embassy 17 hours before we had to leave for the airport,

At the same time this global financial crisis is very unsettling for me. I have to remind myself, things work out.
By Sun-Ling - November 08, 2008 2 comments:

Due to a bout with the flu, early voting, several rounds of out-of-town guests, visa anxieties, and general procrastination, I obviously did not complete my Myanmar postings as planned.

Several folks recently asked me about the route of the new Delta Airlines Shanghai/Atlanta flight. We took that flight - Shanghai to Atlanta - in May but I did not pay attention to the route. Yesterday we flew from Atlanta to Shanghai and I was paying attention to the onboard "moving map". Roughly,we headed north from Atlanta, crossed Michigan's Upper Peninsula and Canada's Northwest Territories, and then passed just north of Pruhdoe, Alaska before heading down through eastern Russia then in to China at Manchuria, passing west of Shenyang and over Beijing, and finally south east to Shanghai. The route in China stays way clear of North and South Korea.

The flight time for the Shanghai to Atlanta leg was about 16 hours - Sun-Ling watched 7 movies - and we arrived at Sun-Ling's parent's house in Shanghai roughly 23 hours after waking up at 4:00 AM in Raleigh. Not bad for traveling halfway around the world.