Jet Lag has been conquered!

The new car is bought. A 2008 Subaru Forester. Our old car was a 2003 Forester so this one seems familiar. Getting along with just one car has been fine so far.

Spent a week at the beach with my parents. Have started the rounds of visits with friends and family.

The old microwave started making a loud noise so we bought a new one.

The refrigerator won't freeze and can barely keep food cool so we are buying a new one. It comes next Tuesday.

The upstairs AC was not keeping up on hot days so ... it needed 4 LBs of freon which is quite expensive these days. Ouch!

The old TV died and we decided not to replace it. No TV. No cable bill. No problem.

The new lawn mower is nice even though it took me 90 minutes to assemble it.

Yesterday I wore out our old 18" hedge trimmer so today we bought a new 22" model. Woohoo! It's nice.

The new printer and disk drive are set up. The new cell phone is operational. And we are about to purchase a new camera. If you remember, our old Canon bit the dust in Laos, and we had to buy a low end Panasonic Lumix for a not so low price.

We have made several trips to the dump to unload dead appliances and throw away old things we don't need. Sun-Ling is driving the effort to reduce.

We still have a to-do list that's a mile long but we are making progress.

The termite inspector came this morning and found evidence of termite activity under the front porch. It's a good thing we have termite insurance.

We have subscribed to the Sunday Paper. Observation: I never once thought about Parade Magazine when we were in China.

Observation: I still like mowing the lawn and trimming the hedges.

Observation: It's still hot and muggy in Raleigh during the summer. Whew!

Here's a photo of Sun-Ling and my parents at the beach. 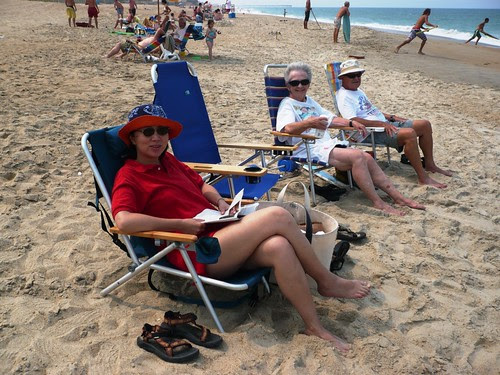 Here's one of me with my new 22" hedge trimmer. 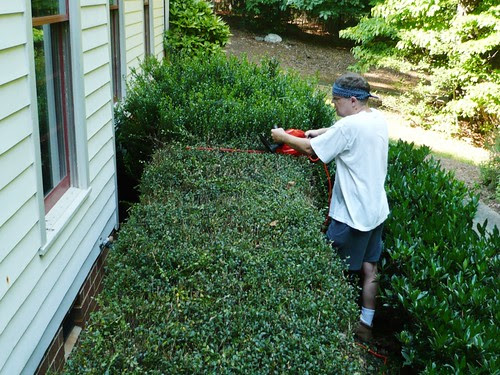 We are back in Raleigh, after uneventful flights last Friday from Shanghai to Atlanta to Raleigh. A million things can go wrong when you have a taxi ride to the airport, multiple bags packed to the weight limit (2 of which are marked fragile), veggie meals, customs to clear, connecting flights, and a rental car to pick up; but "smooth" was the word of the day.

This week we are busy fighting jet lag, buying a car, doing our taxes, stocking the fridge, unpacking, rearranging the furniture, fighting jet lag (did I repeat myself?), sorting through 14 months of unread mail, and getting hooked up to the Internet.

Thanks to our wonderful neighbors Karen & Dave and Tony & Kui for looking after our house.

Thanks for reading the blog and leaving comments and sending emails.

We will be home for the summer, so stop on by or give us a call.

Also, look for more photos of our trip on flickr, and more trip reports here on meckleyearth.
By john - June 04, 2008 1 comment: