We arrived in Zhenyuan immediately following Sisters' Rice Festival. Zhenyuan seemed like the opposite from the festival: plenty of comfortable lodging, quiet, beautiful setting...

We decided to stay for a few days, while Sun-Ling tried to sleep off her cold.

Sun-Ling resting on our hotel room's balcony. That's an historic group of temples across the way. 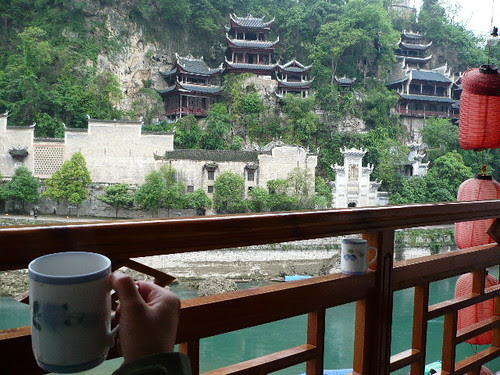 Sun-ling not resting but walking along the old city wall, refered to locally as the Miao Great Wall of China. 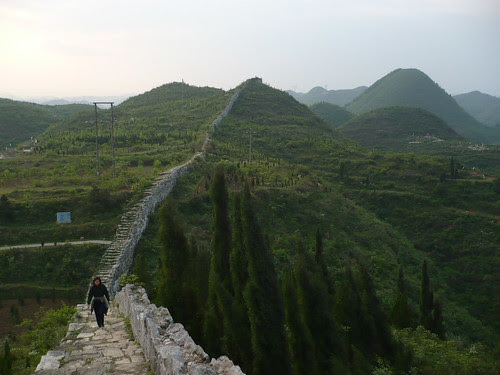 The old quarter in foreground and newer, but still old, quarter at back. 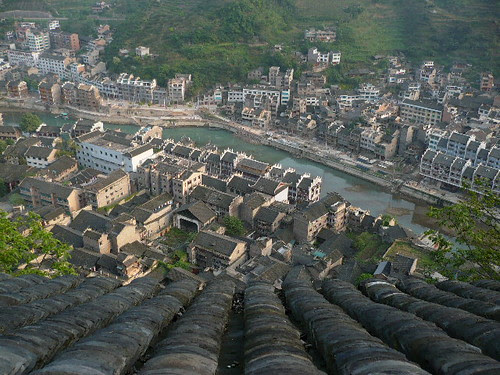 The old bridge on a foggy morning. 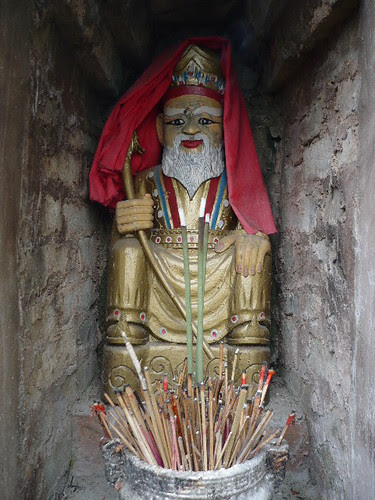 We spent the last six days in Guizhou Province in Taijiang City and Shidong Village enjoying the Sister's Rice Festival of the Miao people.

The festival has evolved over the years and has a modern touch to it. Nevertheless it feels authentic. The pride the locals take is evident. The costumes are simply fantastic.

Highlights were the Opening Ceremony Parade with singers, dancers, water buffalo, and traditonal costumes; the Dragon Lantern Dance where 20 meter long paper dragons are set on fire with fireworks amid a crazed throng of spectators; Dragon Boat Race with lucky ducks hung off the bows of the boats amid firecracker smoke and mijiu (rice wine) drinking oarsmen.

Young Miao women in traditional costume with loads of silver. 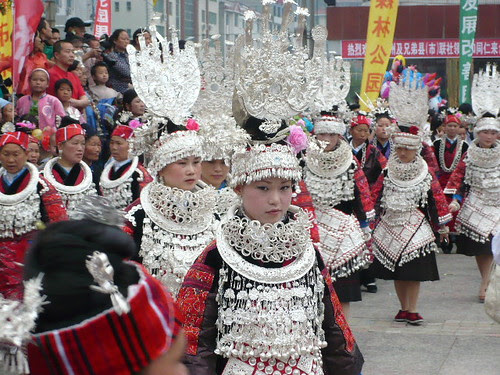 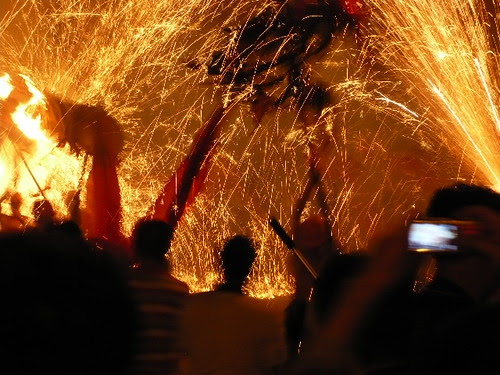 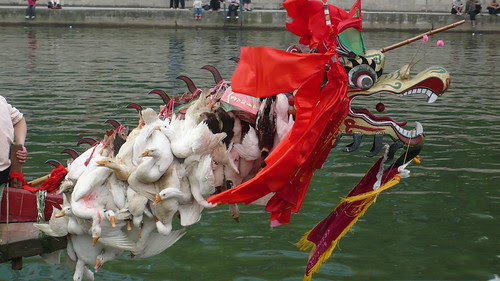 We entered SE Guizhou yesterday, the last of our three-province tour of China.  This area is known for Dong villages which we first visited in western Guangxi. 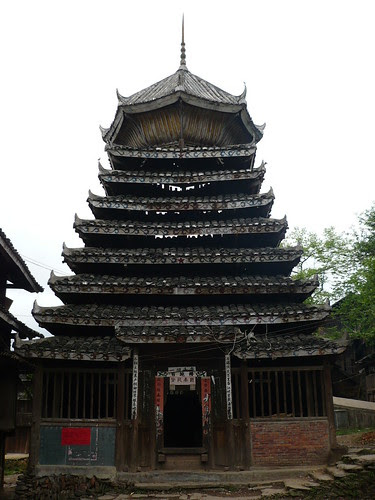 Atypical Dong Wind and Rain Bridge as this one has two levels, one for people and one for work animals. 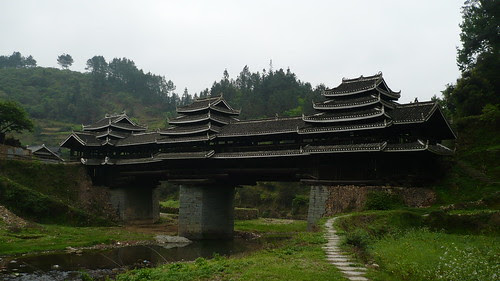 Last weekend we were in Yangshuo during Qingming, the traditional Tomb Sweeping season. This year, Qingming was a national holiday for the first time, and on Saturday the muddy roads and waters around Yangshuo were packed with tombsweeping locals and biking, hiking, and floating Chinese tourists enjoying the 3-day holiday weekend.

Both Sun-Ling and I had never seen real tomb sweeping. In Yangshuo, we obseerved the locals go as a 3 generation family unit to the hillside tomb(s). They walk, motorcycle, or drive. Usally one of the older men carrys a shovel, hoe, or machette. The others carry a cooked chicken and other food, a few hundred small incense sticks, 2 red candles, paper money, red paper, and a string of fire crackers.

After the tomb is cleaned up (weeds removed and stones straightened) incense is lit and food is offered. The more affluent may pay for a Lion Dance. Some burn paper money, others attach it to a flag atop the tomb. Rectangular red papers are pasted on the front of the tomb. Finally, the offerings - including cooked chicken - are taken away, and everyone leaves as the string or three of firecrackers is lit. 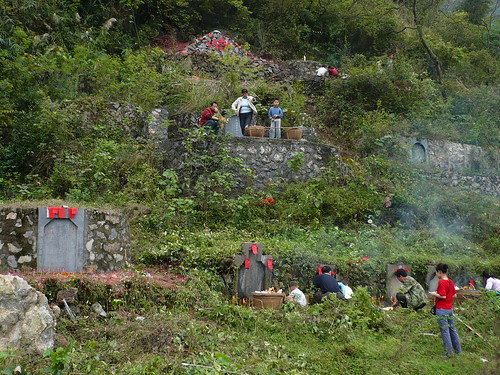 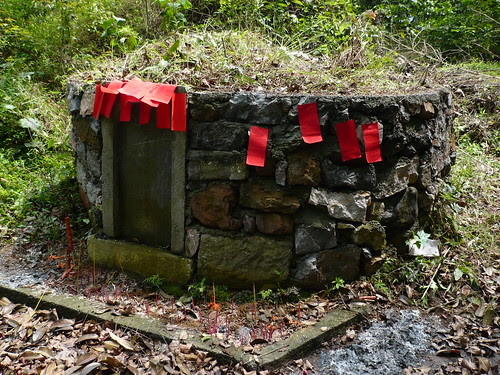 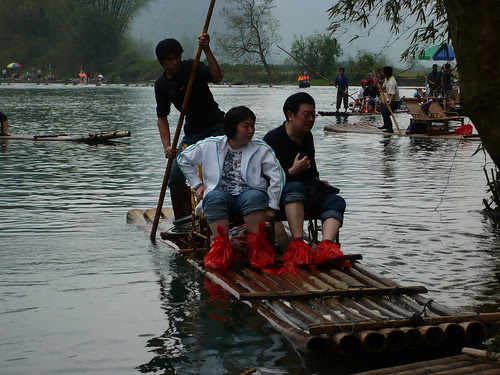 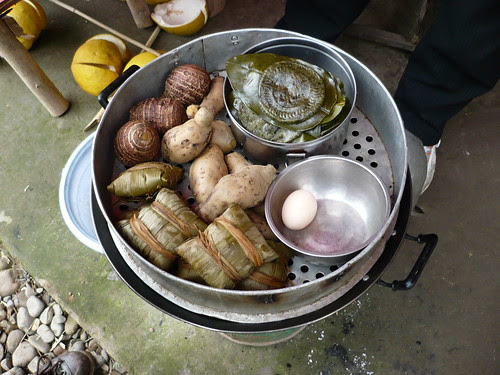 Big birthday, but no cake

I have been getting birthday wishes from family and friends in the forms of email and SMS.  I love it!  It's good to know that I'm remembered, even though I'm so far away.

It's a big one, but we happen to be in a village - Chengyang, Guangxi - where a handful of guesthouses serve up country cooking.  There is nothing that resembles my idea of a cake.  It's a small price to pay for being on the road. 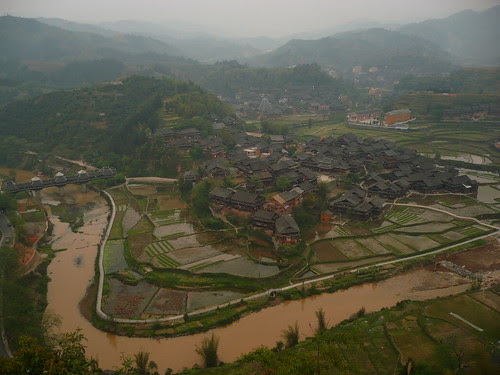 The Vegetarian and the Water Buffalo

You would think that a water buffalo and vegetarian could become good friends. But no. The water buffalo in the left foreground below, head butted me in the side of my left knee just a few seconds after I took the pic. Ouch! He knocked me on my butt, dirtied my clothes, and left me scratching my head. Three days later my knee is still a bit tender and Sun-Ling is keeping a watchful eye on me. 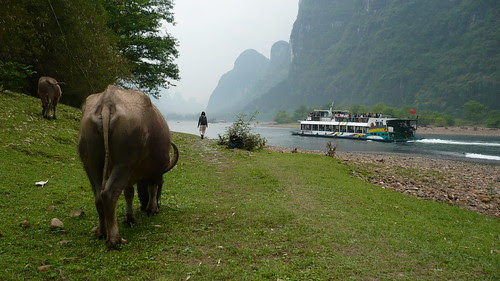 A few more photos from the Yangdi to Xingping hike which crosses the Li River three times. The third crossing is at the famous Nine Horses Mountain. 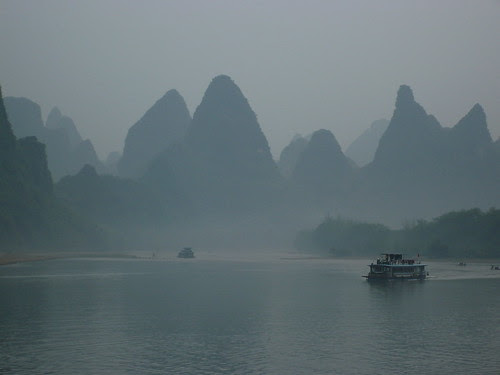 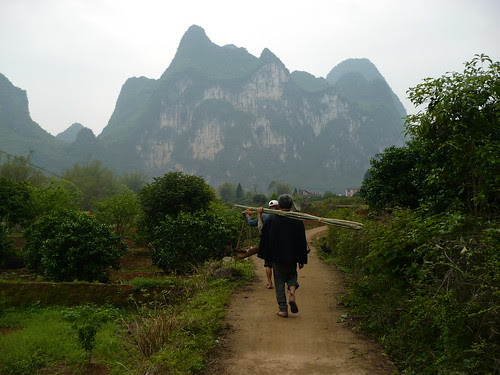 Just the two of us. 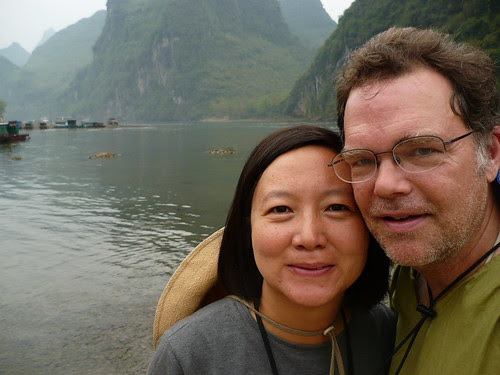 Essentials for a cold and rainy week in Yangshuo, China.

A cozy hotel room with:

Heating and cooling (it may get hot and rainy).

Plenty of room for two. This keeps the fighting to a minimum. Two beds is best.

A floor to ceiling view. Specifically, a view of the Li River and some street activity. A balcony is OK but you can only use it when/if it warms up.

A small water heater and lots of instant coffee.

Free Internet as you will spend lots of time drinking coffee, Internetting, and looking out the window.

You need to have:

Good rain gear since you will go outside at some point.

A list of things to do inside your hotel room like reading your camera manual, studying a local map, writing blog posts, watching snooker on CCTV 5, and listening to the House of Mirth audiobook.

A list of things to do outside your hotel room like using the Bank of China ATM, trying every veggie burger in town, becoming friends with the lady at the bus station Information Desk, finding the location of every bakery in town, and of course buying more instant coffee.
By john - April 04, 2008 No comments:

We have returned to Yangshuo almost exactly 14 years to the day after our previous visit. While somethings have changed, some have stayed the same.

In 1994, we arrived at the boat docks at the end of Xi Jie (West St)after cruising the Li River from Guilin. The weather was hot and sunny. Sun-Ling remembers that she was wearing shorts.

In 2008, we were dropped off on the outskirts of town after riding the bus from Huangyao. We walked the 2 kms from the dropoff to Xi Jie in a chilly light rain with umbrellas up and raingear on.

In 1994 we stayed at an “under construction” hotel a few blocks from the river. John remembers getting a few flea bites. Today we are staying at the Yangshuo Overseas Chinese Hotel on the riverfront in a room with a balcony and a riverview. More on the hotel in a later post.

In one sense, Yangshuo hasn't changed at all. It's still a backpacker hangout. The Li River cruiseboats still unload tourgroups who then walk up to their hotel or to their return bus to Guilin through a gauntlet of souvenir shops and touts.

However, everything seems 10 times larger, newer, and slicker.

Instead of walking from the docks through Xi Jie, you can now take an electric cart on one of three routes to the bus station. The docks themselves have been upgraded and moved farther north to allow for more souvenir stands.

Watching the local cormorant fishermen is not the only available night activity. You can check out a bar or disco or the local outdoor theatrical extravaganza directed by Zhang Yimou.

In '94, the few English menus we saw were handpainted on wooden signs and mainly offered breakfast. Now, there are dozens of large and small restaurants with English menus and/or English speaking staff serving all kinds of dishes both Chinese and Western. Last night we had dinner at a small place near the main road to Guilin. The owner did not speak much English but had a well translated menu - with prices.

Of course Yangshuo still has the awesome natural beauty of the rivers and limestone peaks. The changes reflect a more prosperous city. Judging by the number of hotels, many more visitors base themselves here, not in Guilin as in 1994. We hope the rain will let up so we can get out and enjoy.

Sun-ling drinks a cup of coffee on our hotel balcony. 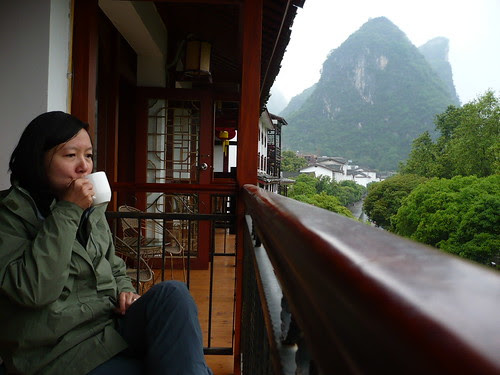 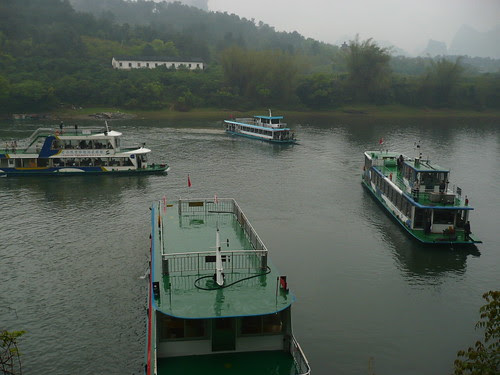 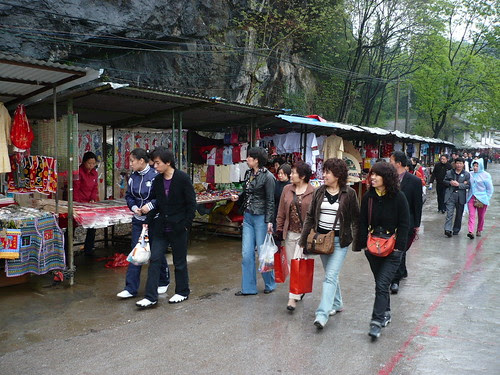 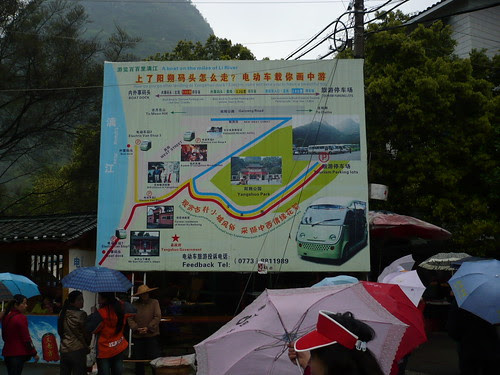 Bamboo rafting on the Yulong River. 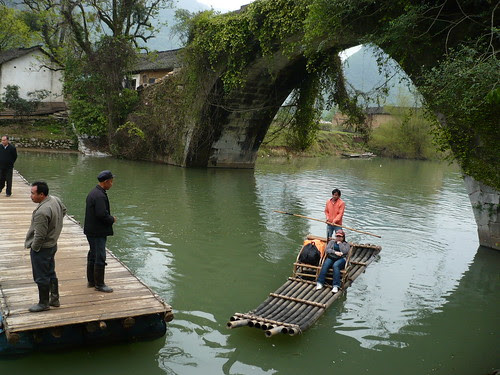 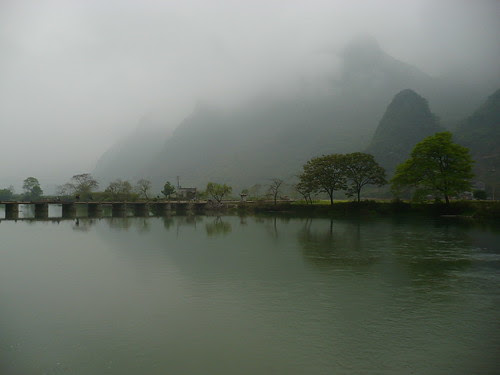 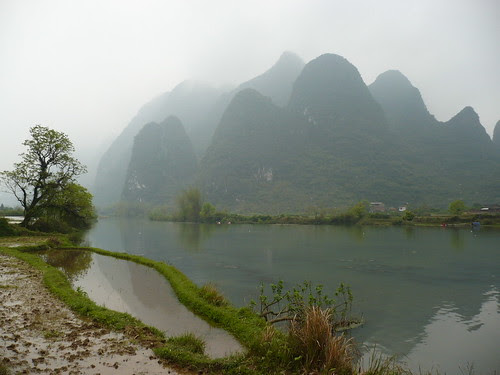 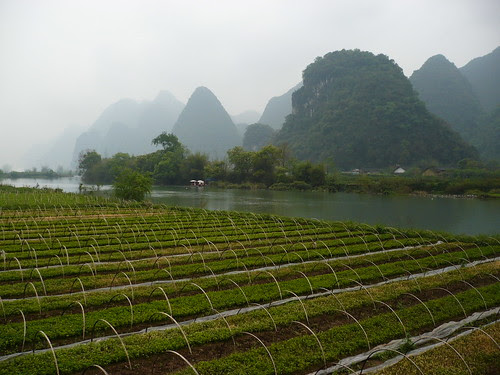