Into Chile by train

After 8 nights in Arequipa it was time to move on south to Chile by taking the bus to Tacna and then the train across the border to Arica, Chile.

Since reading The Old Patagonian Express by Paul Theroux, I've wanted to travel by train in South America, but never had the chance; until now. This would be a short ride, little more than one hour on an antique train. Not the fastest route either, but I was hoping for a romantic ride on the rails.

The bus ride to Tacna was uneventful. We had 45 minutes to kill before the ticket window opened at the train station, so we headed over to the town square, devoured our packed lunch and admired the fountain and church designed by Gustave Eiffel.

Bought tickets, cleared Peru immigration, snagged snagged some seats, and the single car train - engine and coach all in one - pulled out of the Tacna station just after 4PM Peru time.

The station is in city center and for the first few miles the tracks went right down the city streets;lots of tooting as there are no crossing gates or signals. Then into the desert passing a large land development project; or squatters?; or speculation?

The single coach is crowded with about 80 passengers; a few travelers like us, some Chilean vacationers on outings; and a quite a few day-shoppers from Arica returning to Chile with enormous bundles of toilet paper. Turns out that toilet paper is much cheaper in Peru. Hmm. In the end, not such a romantic trip. ;-)

Pull into Arica just after 7PM. It's a one hour trip but Chile is 2 hours ahead of Peru. Find a hotel and crash. The next day we switch hotels, eat lunch at a vegetarian restaurant run by Taiwanese, check out 2 more buildings designed by Eiffel, and enjoy a walk up to the old fortifications above town with great views of the port and Pacific Ocean.

Here are the photos: 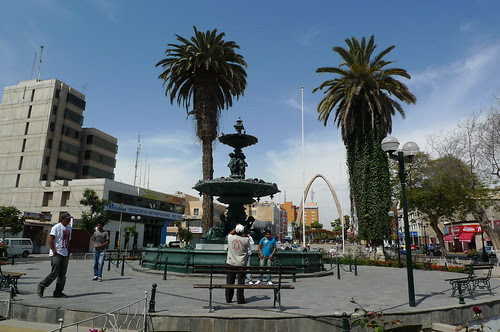 Boarding the train in Tacna, Peru. 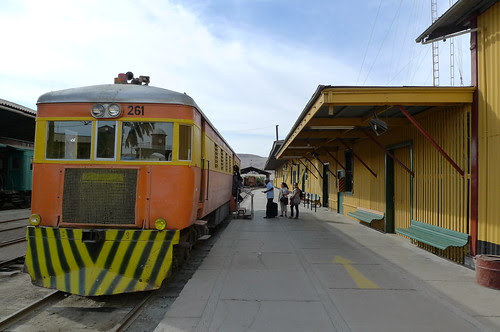 The train from Tacna, Peru to Arica, Chile. 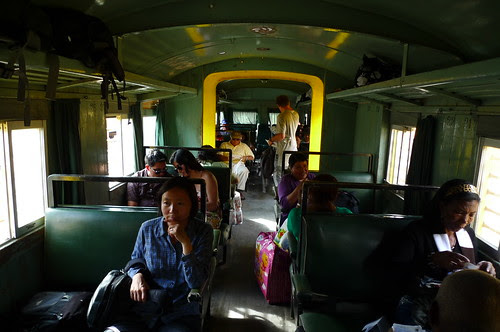 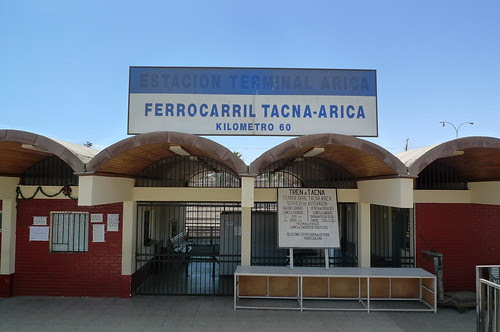 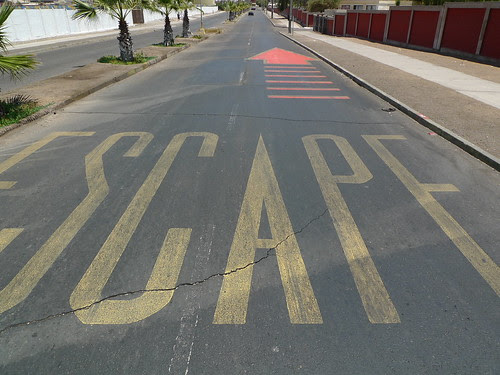 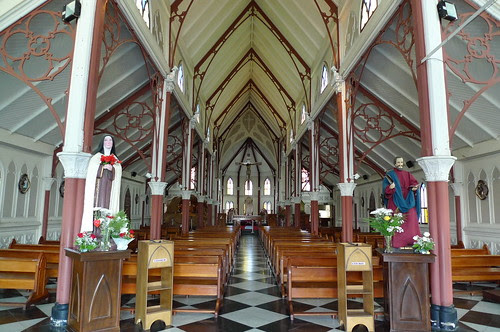 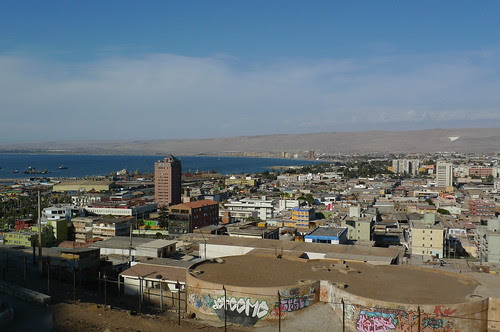 The Port in Arica - with fishing boats, tugboats, and container ships. 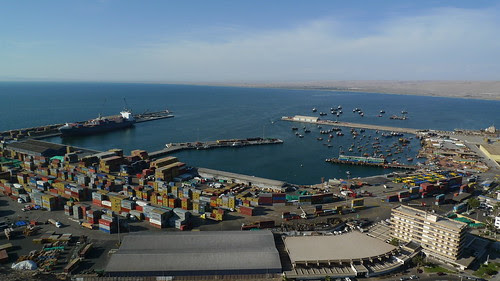 Container ships? Exports leaving or imports arriving. Some of each, I'd guess, but which predominates?

Appears you jump from country to country about as easily as we do, or at least did, from USA to Canada.

Big celebrations to roll the year? Lots of fireworks? We returned from NJ with a stop to visit cycling buds in DC and Ikea to buy drawer pulls, 13 hours for an 8.5 hour circuit. We didn't see the acorn drop!

Just caught up with you. Looks like the trip is going well! Best wishes for 2011 from Trichy, India.

In The Port - Arica photo, I don't see any traveling crane over the container stacking area. Am I missing something?

@Crash - Best wishes for 2011!
1)Don't know for sure if imports or exports are greater, but we guess that exports are greater due to the high prices that we see here for consumer goods, food, hotels, and transportation; in other words "protectionism" in the form of high tariffs or restrictions on imports. But that's just a guess.
2) I also noticed that there was no traveling crane. It's a mystery.

@Kathy - And Safe Travels to you in 2011! The India section of your trip seems to have spawned many a tale so far. Looking forward to hearing the stories in person.